There Are Two Model Mugging Women Self Defense Programs.

1. Basic Self Defense Course focuses on a single unarmed assailant.

2. Advanced Self Defense Course focuses on armed and multiple assailants.

The Advanced Self Defense Course addresses:

1.  Defense against a single armed assailant.

Our teaching methodologies allow us to teach the Advanced Self Defense Course in a single weekend. However, depending on time available with personal schedules, and funding the course can be taught as two separate classes. The advantage of separating the class into armed and multiple assailants is more practice with the respective topics.

1. Self Defense Against Armed Assailants 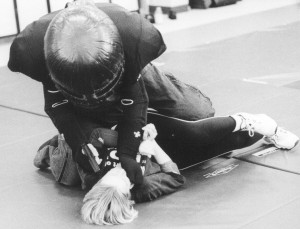 Model Mugging student applies her skills against the padded assailant in a scenario portraying an armed rapist with gun.

Women are usually the targets of unarmed assailants. Acquaintance rapists occasionally use weapons, but the majority of rapists using weapons are strangers. Abusive partners occasionally use weapons to intimidate and in times of extreme emotional turmoil will use a weapon against the woman they claim to love so much. Men are more likely to be assaulted by a weapon-wielding assailant.

Just because an assailant has a weapon does not limit your options, although your options may change. Timing the counterattack with physical accuracy becomes more critical. The same skills, strategies, and movements learned in the Basic course apply seamlessly only to be simply modified for self defense against armed assailants.

Self defense against armed assailants can be taught over the course of a weekend. Defense strategies and tactics against armed attackers wielding a club-like objects, knife, or firearm are covered with full force practice  against the padded assailant.

2. Self Defense Against Multiple Assailants 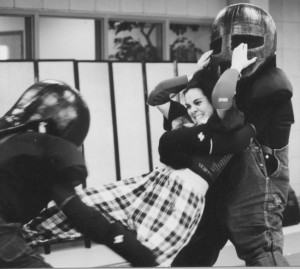 Model Mugging student applies her fighting skills against two padded assailants in a scenario portraying a relocation or kidnapping attempt.

Some women are the victims of gang rape. It is likely most members of group assailants would not have the courage to carry out such acts by themselves and would only commit criminally sexual behavior under the anonymity of the group. They attack victims as a means for group interaction and competition; victims are simply their prizes of entertainment.

If attacked by a multiple assailants, compliance will most often lead to rape multiple times over. Fighting for your freedom can emerge as a viable option.

Scheduling self defense courses against multiple assailants may require more planning because more instructors are required for multiple attack scenarios.

Women taking the Advanced Course find fighting off armed and multiple assailants exhilarating, and extremely empowering. The foundation of skills developed in the Basic Course gives students the power to move effectively in the advanced course. Students learned to channel the power of their fear in the basic course. Consequently, they are surprised to learn that the Advanced Course is easier than the basic course.

Course energy level peaks even higher as women learn to fluidly move and free-flow strike as well as effectively using an assailant’s weapon against him or one assailant against another. When women learn the basic self defense skills, defense against armed and multiple attackers, they naturally adjust the self defense techniques already learned.

The Advanced self defense course for women is 20 hours in a combined weekend, or it may be divided into two separate weekends that can be broken up into various weekly intervals or the preferred single weekend. Advanced Self Defense courses are taught on demand. If you would like to be placed on our notification list, contact us:

Links to other Self Defense Course Options: