There is a difference between training for combative sporting competitions and real fights for survival.

Conflict and competition is a natural part of our world. Competing against others involves survival challenges as well as self-improvement, physical fitness, and fun. Sporting events have evolved as a means of reducing the fatal outcome of warfare and interpersonal violence, especially tribal warfare. Better to have two individuals, or two teams, engage in competition than the village and city-state fighting it out. In civilizing battle, rules, referees, and regulators (timers and end points) were established to protect the participants and determine the winner. The competitors represent their group, tribe, city, or nation seeking respect, honor, and celebratory accolades. 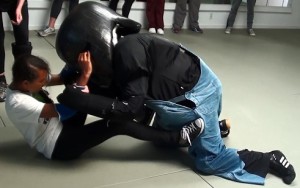 The trained Model Mugging instructor can “spar” when wearing the padded equipment, but his student fights back with full force kicks and eye strikes.

Many sports have evolved from fighting skills. The martial arts historically were derived from various purposes from oppressed groups who developed methods to defend themselves under situational conditions. These skills continued to be practiced in a variety of manners throughout the world, and rather than harm the participants it made sense to find ways to reduce the fatal and permanent damage from full skill deployment, but still maintain the thrill of testing one’s skills in competition.

Some martial arts are practiced for sport rather than self-defense. Martial arts competitions may include boxing, wrestling, mixed martial arts bouts. Many call the competition phase of training “sparring”, because it is not real fighting, but fluid contests with agreed rules. Combative sports practiced for sparing and tournaments do not provide real world answers to criminal attacks.

Even firearms shooting competitions use standing targets and do not address the many additional dynamics involved in a real gun battle when the enemy is shooting back. Consequently the popularity in paint ball competitions, Airsoft guns, and Simunitions using weapon conversion kits to fire non-lethal but stinging projectiles for shot and maneuver training. But these training innovations, too, have limitations in reduced accuracy and range.

As with all sports, rules are established for safety considerations and longevity of participation. Conditions are matched to create a level of fairness, weight class, age, and gender categories are established to remove dimorphic disparities between competitors creating a fairer “playing” field. Even contemporary mixed martial arts competitions, or cage fighting, have become more restricted by removing the fighting realities of street violence in order to better protect the participants from permanent physical damage.

During combative sporting events safety expectations are mutually agreed upon in advance. Conversely, during real street attacks, perpetrators seek advantages and disparities before the attack. They also have no remorse about the consequences of their actions, are drunk, on drugs, or have a mental illness. Real fights do not have weight classifications, gender separation, or referees to balance the fight or protect the fighters. Many attack their victims by surprise or when they are isolated from assistance.

A small percentage of women become competitive athletes in boxing, Judo, Karate, wrestling or mixed martial arts. Some of these female athletes may do well fighting off an assailant depending on the typology of attacker. Sporting experiences provide many benefits of simulated battle but have limitations when applied to protection from real crimes, especially crimes against women.

There are many types of combative training available. Each has advantages and disadvantages depending on your assessment of the purpose behind your training objectives.

Model Mugging allows students to fight rather than spar. Since the early 1970’s Model Mugging has applied reality based self-defense or scenarios to more realistically practice skills similar to situations students might face if attacked. Full force fighting skills can be practiced in a safe manner for both the student and the instructor-trainer. No one gets hurt.

Through the application of martial science, combatives training can become real fighting.