Male and female co-instructors work as a self-defense instructor team during Model Mugging Self-Defense courses, The female instructor role models the proper technique and spirit while the male instructor supports the women models an assailant at various stages in the program. Students witness men and women working together in a nonviolent and productive way, which many be new for some people (women and men) who may have never experienced or witnessed inter-gender teamwork before.

Woman self-defense instructor supporting and coaching a student during scenario.

The female instructor demonstrates and role models the proper skills applying Albert Bandura’s concept of role model mastery similarly applied to overcoming fear of flying or fear of snakes through step by step mastery of techniques giving the confidence to perform each task successfully.

Teaching women self-defense without a female instructor can be emotionally and physically dangerous to the students but also physically dangerous to the male instructor wearing the protective body armor. As a self-defense instructor team, the woman instructor demonstrates the self-defense techniques, but also performs as a coach and safety referee for both the student and the male instructor wearing the padded suit.It is imperative the padded assailant is used under the guidance of a trained woman self-defense instructor who is trained in the system and is familiar with the equipment and the multiple dimensions of the impact of full force fighting. Students first learn the correct feeling of delivering various types of decisive blows that would incapacitate (and have incapacitated real rapists). Incapacitation means that the assailant can no longer be an immediate threat. 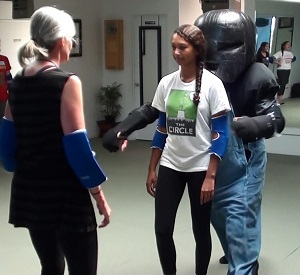 A woman self-defense instructor is a crucial element of coaching women during full contact fighting. If a female instructor is unavailable, no fighting should even be attempted. Model Mugging is more than learning how to fight. The course is about preserving and protecting life through empowerment.

Model Mugging personal safety is a system based on extensive research involving multiple disciplines and professions called martial science. The course takes each student on a journey that effectively and powerfully develops her skills. The “padded assailant” is the core tool used in the system, but it is the progression in the training process that is critical and makes Model Mugging the most advanced women’s self-defense program.

The female instructor is the supportive leader and role model for students to work toward developing their self-mastery, personal safety, and empowerment through their individual journey through their self-defense course. 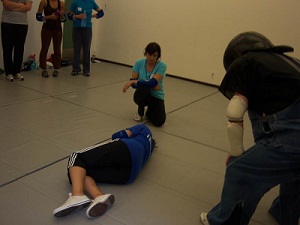 Female self-defense instructor coaching student in a lying down scenario that is about to begin as her co-male instructor, wearing the protective body armor, is starting to approach.