Firearms Pros and Cons for Self-Defense

A firearm is an excellent choice of a self-defense weapon for personal protection and one of the best equalizers against a criminal assault, especially for women. But realistically remember that you require foreknowledge of an attack, similar to using any of the Quick Fix Items for self-defense. In a real attack, situations evolve quickly, whereby getting to the weapon is not always a realistic an option.

Guns may be an excellent tool for self-defense, but what do you do if you did not have your gun when you need to protect yourself?

It is important to understand the limitations of firearms for personal protection as with relying on any Weapons, Gismos, and Gadgets. 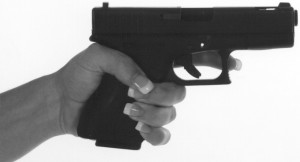 Model Mugging student holding a firearm demonstrating that unlike the movies her finger remains off the trigger until ready to fire.

Learning how to use a firearm and possessing one in the home is a very empowering experience, especially for women. Surveys have found that gun owners primarily purchase a firearm for personal protection and gun owners almost unanimously report feeling safer because of their guns inside their homes. Tom Smith and Robert Smith estimated that about 12% of women own a gun and about 4.5% to 8% own handguns and these women are usually married living outside large cities (Journal of Criminal Law & Criminology, 1995).  The Gallup Poll (2011) reported 23% of women own guns inside their home compared to 46% of men in the United States. In 2013 the PEW Research Center reported 30% of women and 45% of men own guns.

A woman (or man) should not rely on a firearm as her only means of self-defense. Weapon ownership is one aspect of personal protection. There are many factors she should consider:

Firearms must be secured and kept out of reach of children to prevent injuries and death to themselves or their friends that may involve a gun safe or trigger locks. Child safety becomes a concern wherever you go and if you put it down. Many states have passed negligent parent laws that criminally charge parents for “accidental” shooting committed by children involving unsecured firearms. These laws are the result of incidents where children have obtained their parent’s firearm and shot themselves or a friend, or worse taken it to school and used it in a school shooting. In other occasions, gun users have shot their own child, another loved one, or roommate when terrified that a burglar had invaded their home in the middle of the night.

Carrying a Gun for Personal Safety

If you are considering carrying a gun for personal safety, check with your state laws. Some states like Arizona allow citizens to carry firearms. Most states do not allow concealed firearms, or concealed carry permissions. When relying on a gun to assist you in personal protection, remember that you must carry your gun everywhere you go, if you plan to have it at the time of an assault. But you must still have time to get to it, unholster it from your waistband or purse, and bring the sites on target. It can be bulky, awkward, uncomfortable and many times inconvenient.  Traveling, especially air travel and going to foreign countries, also make it difficult to bring your weapon with you for personal protection.

Owning a firearm requires responsibility in securing the weapon, but also when using the weapon. Periodically practicing with it to maintain proficiency if suddenly needing it is highly recommended. There are also legal parameters of using a firearm in self-defense. For Model Mugging graduates, the parameters of justifying the use of their physical skills are similar and will not be discussed here.

Mindset to fire the gun at another person is important factor to consider if selecting a firearm for personal protection. A misconception that continues is shooting someone in the leg to stop them. Police are criticized for not being able to do this. In Hollywood movies, anything is possible, but reality involves many other factors in life or death situations. Shooting a moving assailant can be difficult to strike in the chest area, much less aiming for a thinner and moving leg. If you are justified to shoot someone in the leg, then shooting at the assailant’s chest is also justified when you believed you felt threatened enough to pick up the weapon in the first place.

A fact often misunderstood by people who decide to use guns for protection is seldom will one or more bullets instantly stop an attacker. People who are shot may not immediately fall down like in the movies, especially if under the influence of drugs or alcohol. Even if you shoot someone in a gun-to-gun confrontation or gun battle, chances are the return bullet is going to be on its way toward you before he falls and dies. Even if he is unarmed and you shoot him, you may still have to physically fight him.

Unlike movies, people who are shot may not immediately fall down. Even if you shoot someone first in a gun-to-gun confrontation, chances are his bullet is going to be on its way toward you before he falls and dies. After being struck with multiple bullets, an assailant could be mortally wounded and not fall to the ground. Those fatally injured may have 10 seconds or more before they collapse. The Dead Man’s Ten Seconds is a term used to describe the ability to being able to continue fighting for another ten seconds after being mortally injured. This works for you as well as the criminal. Just because you were shot does not mean the fight is over or lost.

Criminals have been known to keep fighting and many times were still able to reach, grab, struggle, and often disarm the shooter. Victims too have been shot and courageously disarmed, or killed, the assailant after being shot. Assailants and victims may have far more physical power than they would normally have because the surge in strength is part of their “adrenaline state” and/or firearms training. Other times criminals are high from drug use, in a mental state of psychosis or in an intense angry mindset. One violent criminal was shot by police officers over thirty times before he finally fell to the ground and died.

Women who have successfully used guns to protect themselves had the foreknowledge of the assault. Paxton Quigley makes excellent arguments for gun ownership in her book, Armed and Female, and also described in an article published by New Dimensions Magazine, “A Muggers Worst Nightmare” by Jeanne A. Harris.

In another article about “Guns a Girl’s Best Friend” that was published by Moxie Magazine about “Common sense Self-Defense” by Carolyn Reuben.

Paxton Quigley describes numerous instances where women have used a gun to stop an assailant. However, there is a common theme in firearm personal protection stories. The criminal unknowingly allowed the woman to conveniently retrieve the gun from her hiding place, and shoot or detain the assailant at gunpoint until the police arrived.

Paxton Quigley describes a story in her book Armed & Female (pages 25 to 28). A woman was taking a shower at home when an assailant climbed through a closed but unlocked bedroom window. When she opened the shower curtain, he was standing in the bathroom doorway, leaning against the doorjamb holding a large knife and grinning. He came into the bathroom, making the knife very obvious. He sat down on the toilet seat cover and told me to dry off. After she dried herself off, he told her to put on some perfume and then ordered her to the bedroom. He sat on the bed flashing his knife and told her to put on her sexist underwear for him. She went to the underwear drawer and turned around with a pair of bikini underpants in one hand and a gun in the other hand. The assailant was so surprised that he dropped the knife and dove for cover. The woman held the assailant at gunpoint and ordered him to call the police.

Do not think that since you own a gun that you will be safe if attacked. Owning a gun can be an excellent home defense tool. It is a highly developed tool for protection that can equalize the scales against brute strength. Firearms are one of the most effective tools for defending life and freedom. But for effective firearms use, you must have the forewarning of an attack and then have the time to get to your gun. But once you have a gun in your hands for protection, you have an effective tool when combined with proper training.

Despite recent negative political agendas, there are very positive benefits to the responsible use of owning firearms for personal self-protection and protection of individual liberties.