Mace was the first chemical agent manufactured for personal safety use in the form of a defense canister. Mace is not considered as effective as pepper spray. 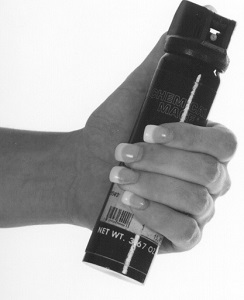 Mace canister shown above is an older chemical self-defense item that may be combined in some contemporary pepper spray products.

Mace is a product of CN gas  originally developed as a chemical agent during World War One. In 1928, Courson and Stroughton developed Orthoclorobenzamalononitrile (CS), which is a crystalline powder and not a gas. In the 1950’s, the U.S. military began working with CS, which was found to be about ten times more effective/irritating than CN gas. In 1965, CS, Mace, was adopted as a tool and used by law enforcement agencies used in crowd control during civil unrest.

There are several considerations when evaluating whether to carry Mace for self-defense:

CS within Mace does not affect everyone equally, and in cases where someone is angry or on drugs/alcohol. After spraying from a Mace canister, the CS may take 20 to 60 seconds to take effect, if at all.

If Mace is used, some of the symptoms of CS chemical exposure are tightness in the chest, nose, or throat, a coughing or choking sensation, profuse watering and involuntary closure of the eyes, and profuse runny nose, as well as a burning sensation in the eyes, lungs, and skin. The skin may have a burning sensation that is more painful if the skin pores are opened by previous or current sweating.

Sometimes nausea, vomiting, disorientation, and panic are experienced, but usually occur when higher dosages derived from riot control/military sized canisters, or during training exercises in teargas chambers are used for protective ‘gas’ mask familiarization training, or during civil unrest, or during SWAT operations.

Before pepper spray, law enforcement officers carried Mace canisters with a potency level three times greater than what was sold to the general public.