Martial Science began as a result developing realistic and proper self defense training for women after a woman concurrently training as a black belt in Karate could not protect herself from a criminal attack. She was violently beaten and raped. She returned to her martial arts school and was told she needed to train harder. She left the school and also denied the assistance from one of her fellow black belt students. 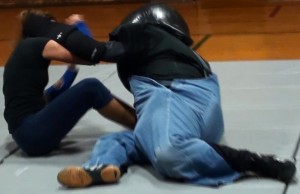 The evolution of martial science originated with the hypothesis that the martial arts were not practically taught for real street violence. When a black belt martial artist could not stop a rapist’s violent assault, she returned to her black belt class and was told to train harder by her instructor. Instead of receiving assistance and comfort, she was scolded for failing her martial art. This survivor was mugged three times. The first literally by the rapist, the second time symbolically by her instructor, and then third was a self-mugging of her self-worth.

The term martial science is being used to describe studying different martial arts, or sometimes as the testing of fighting techniques. Further, some universities are now offering degrees in martial arts.

Instead, the original application of martial science was applied by Matt Thomas who synergized numerous disciplines that evolved into Model Mugging by extracting elements from the traditional sciences and applying them to the teaching process. The science was helping students develop basic but realistic martial skills. 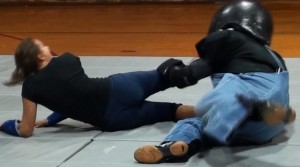 Self defense student fights back against padded assailant in martial science program.

The naming of the Model Mugging system began as a “Role Model Mastery” program. Role Model Mastery was tested by psychologist, Albert Bandura, who was studying changes in self-efficacy and agency applying techniques to help people overcome phobias such as intense fear of snakes or flying. In the case of Model Mugging, it was designed to overcome the fear of combat and overcome the freeze reaction and turn fear into power. Related for women, overcoming the fear of attack also fits into this original construct of role model mastery, which is how Model Mugging derived it’s name.

Martial science synthesizes many separate specialty fields of science and professional studies into the mind-body-spirit integration for fighting back against an assailant. Extracting practical applications from many sciences is then applied to human dynamics in meta-communication and boundary setting. The biological sciences of physiology, kinesiology, endocrinology, neurophysiology, and sexology are applied to improving students’ kinetic skills when under the stress of an assault. Interpersonal effectiveness in conflict resolution taught in Model Mugging draws its success from anthropology, history, primatology, sociology, mythology, and especially psychology. The dynamics of crime are also involved in strategies and tactics for developing options that apply aspects of criminology, law enforcement, law, military sciences, and victimology. Many facets of the martial arts are interwoven within the applied fighting skills practiced within the Model Mugging martial science program.

Martial science first requires the determination of what is relevant, then analyzing the potential options, and third applying proper training. After analyzing crime, then self defense and fighting, especially for women, becomes very simple, effective, and empowering. The Five Principles of Self Defense © are an embodiment of applying decades of martial science research and full force self defense teaching experience.

Martial Science Is the Teaching Process in Realistic Self Defense

Martial science involves how to most effectively teach and develop the fighting spirit in students to protect themselves without inhibitions of naturally using their skills full force. Applying the principles of martial science is the most effective method for self defense training, especially when training women in self defense. Research qualifies the curriculum and is not an accumulation of martial art techniques. The science is in the presentation and learning involved in the curriculum. What many students benefit from Model Mugging classes is the result of applying science into the teaching process that maximizes the development of human performance within a shortened time period. 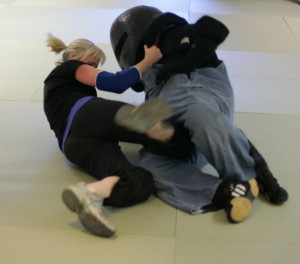 One facet of martial science is when Model Mugging students strike the padded assailant.

Martial science is more than applying martial arts techniques when teaching or learning self defense. Many martial arts practitioners see the protective suit and want to test their skills against it. Full contact or full force self defense in simulated scenarios is more than wearing protective body armor and having students practice strikes. The concept of putting on protective body armor was convinced as a tool that applied other principles of teaching and learning before hand. Founder, Matt Thomas, applied martial science in 1971 creating the 1/3 mind, 1/3 body, and 1/3 spirit approach to teaching a course originally designed for rape defense. Model Mugging principles can be applied to teaching men and children as well as carry over to other types of instruction.

The mixture of practicing basic martial skills with methodical presentation structure provides a journey for each student that they find empowering. Many survivors of violent crimes find this journey, where they are able to face and overcome their fears, very therapeutic. Model Mugging is not therapy, but has been a tool used to assist in individual breakthroughs. Martial science is training the whole being of a person mentally, physically, and emotionally. There is a science to working with violence and by the end of the self defense class graduates find more peace and joy in their lives.

There are many dynamics of martial science involved in this role model mastery program that are described in many sections of this website, including why Model Mugging is different. Martial science has evolved as a methodology of instruction and learning principles that is synergized from a myriad of academic and martial disciplines into the most advance and effective full impact self defense program available.

Applying the tactics and techniques of realistic crime prevention measures is also an important factor in martial science.

Beware of Outdated Self Defense Methods