Developing combat conditioning through muscle memory, or operant conditioning, is the foundation of the physical portion of the Model Mugging Self Defense System. Model Mugging is the original, most advanced and safest Adrenal Stress Training course available for women. This full force impact self-defense program has been evolving since 1971 helping women shield themselves against rape and other crimes. 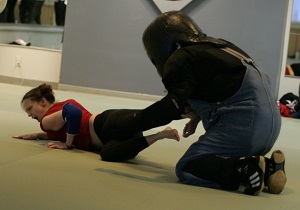 Muscle memory means that our bodies are able to learn actions and then perform these same actions without thought; the mind and body are united in a “flow-state.” Just like learning to swim or ride a bicycle, once we learn we do not forget. The fighting techniques will be performed through scientifically proven methods of repetition and then applied in real fights where the experience of stress and coaching lock the movements into the body’s subconscious reflexive memory.

It is estimated the average human retention is just 10% of every course we attend after taking traditional self-defense classes. Many women have complained they could not remember the moves shown to them in those courses. The more physical the repetitions, and the more realistic the training using both positive and negative stimuli, the percentage of mind/body retention is dramatically increased.

In traditional martial arts and self-defense classes students do not learn how to hit an assailant with full force or deal with the element of actual fear, which is definitely a real and absolute factor in a real life attack. Consequently, the effectiveness of these programs is limited.

Typically 80% of what students learn will be forgotten within 24 hours after taking such a class. As time moves on, they may only retain about 5% of what they had originally learned. Something may be better than nothing, but remember that a woman who ineffectively fights back has a greater chance of being injured more severely and may increase the length of the assault.

Model Mugging women’s self-defense classes show women how their body and mind respond under stress by reverting to the actions with the most conditioned self-defense response. During the physical portion of the course, students learn what it feels like to correctly deliver a real and decisive knockout blow and then learn how to effectively deliver continuous incapacitating strikes. The mind and body conditioning that is performed during the full force self-defense course creates neuron pathways/connections through the brain similar to the grooves on a record. This is why the progression of training in women’s self-defense is so critical, but at the same time it is why the skills are successfully implemented into muscle memory. If a woman learns a movement incorrectly, it is like putting a scratch on the record. Consequently the desired movement will require a larger pathway/connection of neurons in the brain to override the incorrect pathway.

When your body and mind are under stress, subsequent actions will revert to the most conditioned response. If there are not any conditioned responses relevant to the current crisis, panic, immobilization, or improper actions occur, and the body becomes more vulnerable. In moments of stressful conflict the strongest habit will win out usually overriding all others. In tenths of a second, the mental and physical messages in a person’s mind, body, and spirit follow the nervous system’s pathways that are most developed. In the absence of such learned response pathways, under conflict the brain will revert to evolutionary and fear-driven reactions that can incapacitate you or plunge you into counterproductive and even life-threatening outcomes.

The more times you perform a movement, the larger that groove or pathway becomes. Learning skills practiced in a manner of responding to a negative stimulus in a realistic and intense scenario, make student responses automatic when fighting; operant conditioning. Model Mugging graduates upon being attacked, usually within an average of 2½ years after taking a Model Mugging self-defense course, 86 (60%) had knocked-out the assailants. One woman successfully fought off her attacker eight years after taking the course without any refresher and successfully injured the assailant causing him to be hospitalized.

In 1973 a woman took one of the first basic courses Matt Thomas taught at Harvard University. In 1993 she returned to take an intermediate class Matt was teaching in Colorado. It had been 20 ½ years after she took the basic self-defense course without any refresher training. Matt asked to attack her in the beginning of the class before they started reviewing in order to test her. He “model mugged” her by grabbing her from behind. She immediately responded and delivered accurate strikes with powerful impact. She only missed once and that was when she turned to elbow strike to the face. The rest of her strikes connected decisively.

These cases are an empowering phenomenon, but it is still recommended that women return for refresher self-defense courses in order to keep the information and skills freshly implanted in the cell memory within their body while keeping current with new crime trends for rape aggression defense. Not only do graduates learn to become more aware when reviewing the latest in rape prevention education, but they re-experience the impact of full force fighting in the Basic self-defense course will better shield women against street violence, sexual assault, and escape against rape aggression. Self-defense review classes allow students to realistically assess their fighting skills in relation to their capabilities as they age. What we can do in our 20’s can be quite different than in our 40’s and beyond.