In the 1990’s these items gained some popularity and were the size of a pager or small cell phone that were activated by a pull cord. Technology has improved and some are in the shape of a watch, pendant, or key chain size that require the press of a button. Many vehicles have key fob that also activates the vehicle’s alarm when pressing the emergency button. 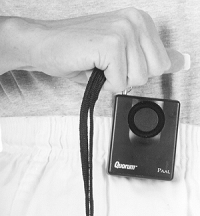 Generally these electronic devices emit loud, ear-piercing noises and some have a flashing strobe light as well. However, the noise is most bothersome in small, enclosed areas.

One of the benefits to this personal safety device is that it cannot be used against the intended victim. Anyone within close proximity may suffer pain and ringing sounds in their ears afterward. Some people generally carry noise making alarms for personal protection outdoors, where the noise is easily dissipated. Some shriek alarms contain a built in combination flashlight and strobe light which can assist you in quickly finding the key hole at your front doorstep or even use it to check the back seat of your car. The flashlight doubles as strobe light when the cord is pulled. When the pull cord is removed, sound and light is emitted from the device.

Modern society is so noise and alarm cluttered, that people seldom even look out the window when they hear alarms sounding off outside. Far fewer people call the police when they hear a noise alarm; this is contrary to what the manufacturers and sellers of these products would like you to believe.

New technology allows personal alarms to coordinate with smart phones and trigger distress signals. However, someone who is on the automatic notification list must be paying attention, and like the intended victim is also subject to the limitations of cell phones. Another consideration is how easily the device can be falsely triggered such as being bumped or having small children press the activation button, thereby losing the urgency feature of the notification feature.

Using a Personal Alarm as an Improvised Self-Defense Device

When under stress individuals may not think about activating the alarm when confronted by a stranger. After assessing multiple scary situations of being threatened by stranger approaches, a person is more likely to progress their reactions to a public threat by pulling the alarm. But those first incidents, the intended victim may not pull the cord or press the alarm activation button. What we think we might do is often very different than what we actually do when under the stress of adrenaline. These normal reactions to stress are part of the evolution of martial science.

A woman, with a black belt in Karate, was not prepared for the types of assaults directed at women. This incident was the catalyst for developing martial science and adrenaline stress training, sometimes referred to as reality based self-defense training.

Model Mugging found that personal alarms may work best as a distraction when used in conjunction with knowing realistic skills to physically protect one’s self against an assailant. When testing personal alarms under stressful conditions during a frontal confrontation from the padded assailant, our students did not think about pulling the safety cord (or push the button). Students had to be reminded to pull the safety-alarm’s cord. Students resorted to their verbal boundary setting skills and then used their physical skills appropriately when the padded assailant approached.

The noise may alter an assailant’s intent to continue accosting or attacking an intended victim, and he may flee. However, one should never rely on this behavior. There may be cases where the assailant wishes to commit robbery, battery (strike), or kidnapping. These assailants are non-deterred by the sounds of the personal safety alarm.

A potential use for the safety alarm is when an intended victim pulls the alarm, the assailant cannot verbally intimidate his victim due to the loudness of the alarm. A non-deterred assailant must knock the alarm from her body and/or smash it to stop it from sounding off. Simultaneously, he becomes very vulnerable and can be easily injured when he reaches out to grab the alarm or knock it to the ground. But if the intended victim does not have fighting experience, she is not any better off than not carrying the alarm against a non-deterred assailant.

An advantage to this device when compared to other self-defense weapons and personal safety items is if taken away it cannot be used against you such as a sharp instrument, pepper spray, kubaton, or firearm. Although it could anger the assailant where he physically assaults his victim where he may otherwise would not have struck her. The assailant can use larger personal alarms to hit or throw at the victim.

Overall, these alarms do not address the most common threat that women face, acquaintance rapists who apply tactics that isolate their victims consensually. Additionally, the abusive personality makes a personal safety alarm irrelevant.

For the most common threats against crimes within relationships, the best defense is crime prevention for personal safety. However, when a criminal minded individual intersects with your path and lifestyle, having the experience of full-force self-defense taught in the Model Mugging women’s basic self-defense course provides the most options for women.

Those quick-fix self-defense items can add value to personal safety, especially with those personal alarms with automatic cell phone notifications to friends and family. However, the purchaser should be aware of the limitations and not become reliant on any device for self-defense or personal safety.