Model Mugging student applies progressive skill development as she practices a knee strike to the groin in lower stress.

All self-defense techniques are first performed slowly so that the skills and body coordination can be learned correctly, even when first fighting against the “padded assailant.” The padded assailant is the male instructor wearing protective body armor that allows students to strike full force without injuring the instructor or themselves. As the Basic course progresses, the skills are practiced faster and then realistically applied during full speed scenarios that imprint into the mind how to respond properly to a negative stimulus (the mugger). The male instructor models a “mugger”, but at the same time “dances” with each woman teaching them how to improve their physical and verbal self-defense skills while they students are fighting in an adrenaline state.

The Model Mugging system teaches women how to control fear and direct their “fight or flight” energy into powerful and decisive strikes. The objective of proper training is to control the mind and body while learning the necessary skills and applying them under actual stress. Students are able to draw upon the training under a realistic and stressful situation without thought. Stress is developed through scenario based training experiences, also known as reality based self-defense (RBSD).

Higher levels of stress are strategically and progressively implemented into the curriculum. Progressively applying the correct amount of stress is vital to use while training; too much stress (distress) creates flailing, which is ineffective. Stress is created and controlled in the manner in which the material is covered while controlling the speed or tempo in the course as students improve.

The special needs of women are incorporated into the training process in a supportive deigned manner. Instructors understand the dynamics of controlling the different stressors women experience during the course. While dealing with numerous emotions that naturally arise during the course the physical skills are methodically taught in a manner called martial science. This process shows women how to effectively move their bodies using their personal weapons and then allows the realistic full force practices of their skills. 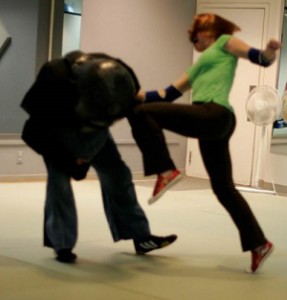 The ultimate objective of the program is to develop a fighting spirit in each student called the “winner’s mindset.” It is an attitude that says, “I will not stop fighting until I win.” That kind of fighting spirit can never be taken away unlike various “Quick Fix” devices or weapons and gadgets.

Unless told, a rapist will not know whether his intended victim has actual fighting experience. Unlike relying on a firearm, the intended victim does not need to unlock it from safekeeping. The attacker may see or take away a stun gun or pepper spray canister, but he cannot foresee a woman’s fighting skills or her “will to win.”

Women learn to harness the powerful energy of their fight or flight reaction into effective fighting skills. In a short period of time, students respond naturally and with full force to the negative stimuli of an attack and fight back effectively!

Other links describing how the Model Mugging Self-Defense program is different: