Best Self defense Training For You?

First, when considering which is the best self defense training for you, it is best to identify and assess your training objectives. Often, availability is a factor in selecting a martial art style or other type of self defense in any given city. There are a variety of martial arts styles that offer excellent learning opportunities, which satisfy various student needs fitting personality, temperament, and physical well-being.

Martial arts schools or dojos offer classes consistently each week making it more available for convenient training than self defense courses specific for women, which may rely on a certain number of enrollees before class can be held. Sometimes coordinating dates and times for a short self defense course can be difficult to conveniently coordinate, even when hosting a course for a group of friends. 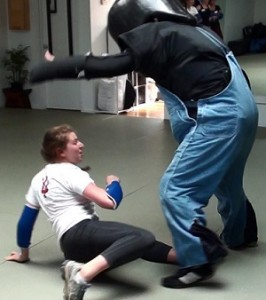 Model Mugging student slides to the ground before padded assailant can grab her while simultaneously preparing to strike him.

Many women study martial arts specifically for the purpose of defending themselves against a rapist or attacker. Although many aspects of the martial arts may be used for self-protection, most martial arts do not address the needs of women.

A women’s martial art style, Wing Chun, was derived from the need for women to protect themselves that compensated for feminine differences when compared to male oriented fighting systems. There are many facets when teaching self defense for women.

Some types of self defense classes are shortened sessions from different martial art styles with an assortment of self defense techniques. Many of the techniques are not realistic for women seeking to protect themselves from common crimes committed against women.

Many short courses are taught with a curriculum of moves based on the instructors preferred martial art style. Rather than understanding the context in which women are assaulted, and working toward realistic solutions, most martial arts instructors teach women self defense classes that are often heavily injected with techniques that apply martial art style to actual crime situations. This process fails to follow the Five Principles of Self defense ©.

Standing martial art styles such as Karate, Tai Kwon Do, Aikido, Jujitsu, each provides a workout and some defensive skills for women. Karate became the catalyst for starting Model Mugging when a female black belt Karate student was unprepared to protect herself against a real assault in 1971 that inspired the evolution in martial science.

Other styles of martial arts focus on grappling and ground fighting such as Jujitsu, wrestling, Judo. Grappling type martial art styles provide excellent workouts and flowing movements that can be used to develop confidence when on the ground, but the principles may not carry over to the dynamics of sexual assault. Grappling and wrestling arts may not provide feasible options for women. Focusing on submission holds against a larger “opponent” with criminal objectives is different than training in a martial arts class.

Mixed martial arts have rapidly evolved since the early 1990’s, but these competitions also apply their own set of rules and limitations as a combative sport. Most people, and even more so for women, are not going to commit to this type of training or engage in that level of sparing preparation. A criminal who studies mixed martial arts is a more formidable foe but, he is not invincible either.

Other types of self defense courses may involve using various:

Model Mugging focuses on teaching skills that both martial arts practitioners and non-martial arts athletes can learn to protect themselves. There are other differences between self defense and the martial arts. For women Model Mugging has been very effective and has proven to be the best self defense training that transfers over and empowers many other parts of their lives.