Martial Arts for Self-Defense or Fighting

Model Mugging has synergized the martial arts into practical self-defense training described as martial science making this the most advanced crime prevention program and and rape defense training available. Model Mugging is not a combative sport and was designed for fighting against violent criminals. 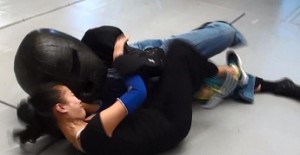 Progressively, Model Mugging student has learned to fight off the padded assailant during a ground fight at the end of her self-defense class.

Model Mugging self-defense draws it’s origins from the marital arts that provided the catalyst to martial science and the evolution in self-defense training. The martial arts and self-defense share common traits but they are not necessarily the same. There are pro’s and cons for both.

Complaints about women studying martial arts are that it takes an immense amount of time and in the end is not really practical in application. There is nothing wrong with studying the martial arts which has many benefits; some of which are improving physical conditioning and flexibility, better fitness, increasing balance and coordination, developing competitiveness, and combative skills. However, martial arts training requires dedication, consistency and time, but much of what is taught is not generally “street” practical or effective. 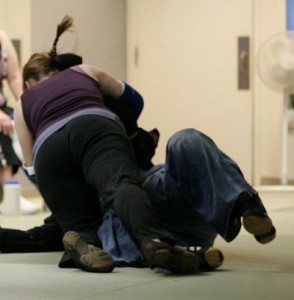 During a single weekend women can learn to harness the adrenaline energy and develop the mindset to apply full force techniques to incapacitate an assailant.

Many women do not have the time it takes to make the long-term commitment to effectively study a martial art in order to make its application effective during an actual attack. Martial arts schools have high dropout rates, inconsistent attendance, and most of what is learned are considered perishable skills in that they require continuous and repetitive review or the skills are forgotten.

Most importantly, students are usually not conditioned mentally, physically or emotionally prepared for real street violence. Studying the martial arts will normally take about two years training four to six hours a week to become halfway proficient at defending herself. But most women do not have three nights a week to learn how to defend themselves. Women work, go to school, have kids to care for, and many other obligations to fulfill.

If a woman does have the time, she will usually spend the majority of her training time practicing with other female students. A woman training with other women is unrealistic because she needs to learn how to defend herself against the size, strength, and speed of a man. But most male students who are serious about training, and not there to win dates with the female students, do not like to train with women because they cannot be as aggressive or as rough with a female training partner. Also most women cannot present themselves as a threatening adversary, thus fail to give her male partner a challenging workout and learning experience. He, too, is training to defend himself against a violent male assailant.

The techniques taught in traditional martial arts classes may be ineffective because the training partner or instructor is not attacking at full speed and power. Realistically the techniques cannot be practiced in full force since that would defeat the purpose of training because everyone would become injured during practice. If a training partner who is playing the adversary role does not attack with a realistic intent to harm in class, he is doing his partner a grave disservice because his partner will believe they possess the necessary skills, which are untested skills.

Traditionally, the martial arts have been designed from a man’s perspective of combat and do not properly train women how to defend themselves against the kinds of attacks women are commonly subjected. Males, who attack females, do not attack them the way they would attack a man. These males typically have an abusive personality.

When a male attacks a female with the intention to rape, he will force her to the ground in order to forcibly control and position her in a variety of possible sexual positions to physically complete the assault. However, the major problem with studying the martial arts is the lack of emotional involvement in the training. Defending one’s self from a real attack is much more than trying to apply techniques practiced in class, especially when the assault is different from what they are accustomed to in class; panic sets in. Overall, studying the martial arts for self-defense is not ineffective for women seeking rape prevention.

Many martial arts instructors with noble intentions commonly offer short self-defense courses but derive their techniques from their own martial arts style and discipline. Typical self-defense classes may teach some appropriate techniques, but women cannot practice in a realistic manner similar to the conditions sexual predators impose upon their victims.

Not all self-defense classes for women are effective for combating street crimes. The most important aspect of traditional women’s self-defense courses is the lack of research and specialized training in how women are victimized. Sometimes martial artists will purchase protective equipment to train with their students. With noble intentions, this is process is often backwards that may not provide realism or an understanding in progressive training to ensure student safety. Reality based self defense training in padded assailant courses are not all alike.

The courses do not deal with space and boundary issues in a realistic manner or the dynamics and phases of sexual assaults. This is a common tactic used by acquaintance rapists. Other women’s personal self-defense classes focus on escape which is the desired objective but is not always possible. Considering the elements of Post-Traumatic Stress in students is another important factor to consider in self-defense courses that martial arts typically do not address either. 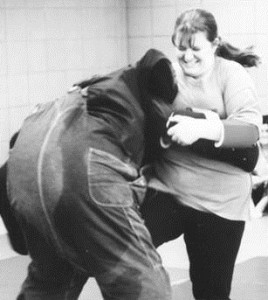 Furthermore, the critical element of “real” fear is left out in the training process in self-defense for women. Each woman may learn wonderful techniques, but if the techniques are not used under “real” fear and under “real” stress, she often freezes in fear when actually attacked. Martial science uses methods that channel fear and program the body to operate in a conditioned no-thought state movements that allows automatic responses for women if they were actually attacked. Muscle memory takes over using fear as an advantage.

There is just no way to become proficient at any of these things without some realistic practice. This is a truth not practiced in most martial arts or self-defense classes for obvious reasons to prevent injuries. The advantages of using the padded assailant in training becomes obvious.

The emotional side of training requires exposure and experience within realistic scenarios. The terrifying images associated with sexual assault can be significantly lowered through repeated exposure that transforms one’s perceived fears into being less frightening. Instinctively, women react to the idea of assault with avoidance, but exposure can remove the sting of fear and develop modified responses to such threats.

Most women’s self defense training courses focus on escape defense against strangers. Other real-world aspects of violence against women involve domestic violence or intimate partner abuse, stalking, and more commonly acquaintance rape. The dynamics of these crimes involve emotional attachments, living arrangements, children, finances, and many other factors where striking options commonly taught in personal defense classes may not be appropriate and escape techniques could become even more dangerous. Additionally, the legal ramifications of using physical fighting skills are also a factor that must be considered.

Click here for more information about choices in self defense and recommendations for women choosing a self defense course.

A recent Model Mugging self-defense class graduate and now instructor stated, “I’ve taken a few self defense classes and Model Mugging was the best by far because it was the most comprehensive program I have seen.”

Other links to assist in considering what to look for in a self-defense program: