Our self defense workshop format allows our students the flexibility of taking the Model Mugging Self Defense Courses. The five workshop self defense series is same curriculum covered in the women’s Basic self defense course that is  based on researching thousands of assaults against women. 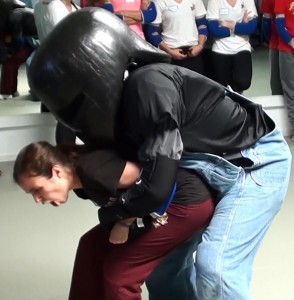 Each self defense workshop focuses on a specific category of attack that women may be confronted. The categories deal with Rear Attacks, Ground Reversals, and Boundary Setting while also establishing the context behind crimes against women.

Our martial science self defense training is more than teaching a group of physical movements. Workshops are smaller segments of the basic course that follows the Five Principles of Self Defense © that address the context from which sexual assaults occur with countermeasures practiced during full force scenarios.

Each self defense workshop builds upon information relative to establishing the total context in which the skills would be best applied. Over the five class curriculum, workshops simultaneously develop the mindset to use the skills most effectively.

The skills taught are developed from martial science and not grouping likable martial arts techniques.

Our Basic Self Defense Course May Be Separated into Five Workshops 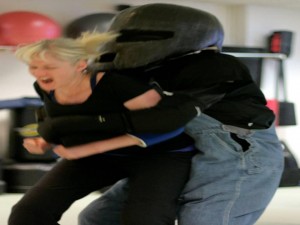 Rear Attack One is our 4-hour self defense workshop that develops the foundation for fighting full force in an adrenaline state. The workshop establishes the mindset for fighting and overcoming inhibitions about self-protection. The Five Principles of Self Defense and Four General Options for women are also described.

This introductory class applies the physical skills in full-forces fights against a padded attacker from a rear attack. This class is the prerequisite for the other four Basic Self Defense Course workshops.

The Introductory Self Defense Workshop is a prerequisite for any of the subsequent workshops.

Tuition for each of the five self defense workshops varies from $75 to $125 depending on location and travel factors.

We offer introductory workshops at the beginning of most of our Basic Women’s Self Defense courses. This introductory class lays the foundation for the rest of the Basic Course that involves a very structured progressive program that is divided into the following sections described below. 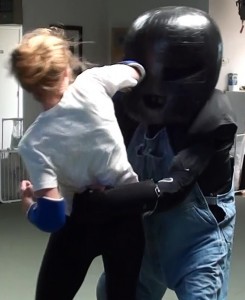 Rear Attack Two is a 4 hour self defense workshop that addressees the Crime Prevention Pyramid and the emotional and physical problem of crime. This self defense class covers the types of violence and how these differences relate to personal protection. The fighting spirit pertaining to self-protection is enhanced with an understanding of the criminal mentality and the origins of sexual predator motivations.

During this second Rear Attack class, the physical skills needed for defending against different rear grabs are applied to full force fights against the padded assailant. Techniques are taught to defend against an assailant attacking in different manners from behind. Rear Attack 1 is required before taking the Rear Attack 2 workshop. 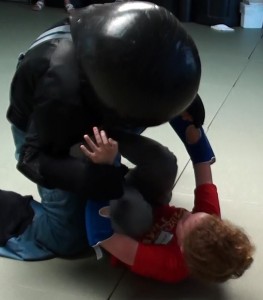 These two Ground Reversal self defense workshops should be taken in succession and are each 4 hours in length. This is the most important class defining assaults against women that impacts mental preparation and sets the context for how to defend against sexual assault. The workshops will describe the dynamics of sex crimes and the four phases of a sexual assault related to rapist typologies. Also covered are alcohol and drug facilitated assaults. Each ground reversal workshop will apply scenario based strategies and techniques against the padded assailant attacking women who are lying or knocked down to prone of supine positions.

Boundary Setting self defense workshop is 4 hours. The focus is on is on boundary setting and conflict de-escalation and addresses the legalities of using force in personal self defense. 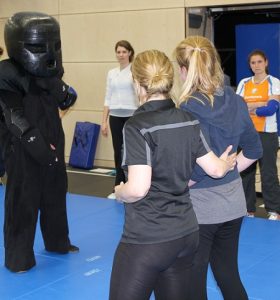 Overall, options are addresses related to assaults against women including dating and intimate partner violence. The self defense class concludes with adrenalized boundary setting exercises and full force fights from front against the padded assailant.

You can contact us about hosting a self defense workshop in your community.

Advanced Course Self Defense Workshops dealing with armed and multiple assailants are taught upon demand. Students must be graduates of the Basic self defense course. The Advanced self defense course builds upon the skills learned in all five Basic Course workshops listed above.