Best Self-Defense Is Winning Without Fighting.

Winning without fighting is derived from knowing how to fight.

The concept of wining without a fight was described by ancient Chinese philosopher and military tactician, Sun Tzu. Winning without fighting is the best self-defense because fighting is potentially dangerous for all the participants involved. Therefore being able to safely avoid the fight is better than being seriously injured or killed.

When someone uses crime prevention measures to avoid a physical confrontation, then they have won! 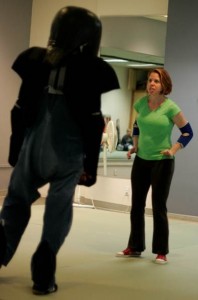 Model Mugging student sets her boundaries and engages in conflict resolution with the padded assailant.

Model Mugging self-defense classes teach women and men to focus on winning without fighting. Although knowing how to fight is a critical aspect of the self-protection recipe for winning without fighting. The best self-defense is having the knowledge and experience in avoiding those common conditions that assailants find attractive when they chose to attack others. The key element is the experience in self-protection and is achieved through adrenaline stress training applying martial science. The realistic training and experience Model Mugging self-defense courses provide then project onto the perceptions of an aggressor/criminal.

Consequently an aggressing assailant senses something is different but often does not consciously realize what it is. There is an aura of confidence he perceives in his targeted victim but he cannot see it directly. The result imparts a doubt in his mind, therefore he leaves her alone. The best self-defense was achieved and she has won without having to fight, which has been reported hundreds of times from successful Model Mugging graduates. When achieving this non-violent success, the application of the best self-defense was the aura of having the experience that projected in the meta-communication dynamics of the situation.

When Matt Thomas began developing Model Mugging in 1971, he applied animal meta-communication he learned from his studies while at Standford University. He combined meta-communication with the teachings from Colin Pittenridge. He applied the premise that approximately 93% of communication is achieved through body language and verbal cadence (tone, pitch, and volume), whereas only 7% was achieved through the spoken word. Model Mugging broke with martial traditions and taught the de-escalating freeze walk position and later the neutral ready stance position for women that has proven even more effective for providing women the best self-defense positioning against abusive male aggression.

In general, the best self-defense is different for women than it is for men. Men are more territorial and hierarchy oriented. Therefore their meta-communications should be different than what has proven successful for women in boundary setting and verbal de-escalation. Men must be able to posture in a way that is non-confrontational but also demonstrative of a readiness to use violent force in self-protection. Male on male violence involve assailants who may begin by posturing or blitzing their male victims by surprise. Although men are sexually assaulted and some of the principles and techniques taught to women will apply to men, men are usually assaulted more often by an armed and/or multiple assailants.

For women, meta-communication used in Model Mugging personal protection classes have been successful at providing women techniques, experience, and ultimately the confidence to  de-escalate the situation. The combination provides women the best self-defense. Conversely, a woman taking a combative stance or martial arts-like posture by blading the body with one foot back and raising the arms/hands in a ready position changes the meta-communication occurring. A male without the inhibition of harming women is likely to naturally adjust his perception of the situation as hostile. Abusive males, who already harbor resentment toward women, are more likely to perceive her behavior as a challenge and adding more justification to harm her in his distorted thinking. The challenging or combative posture of woman is likely to become counter productive and promote the opposite objective of the best self-defense. The potential for more conflict and harm escalates dramatically.

Even for men, taking a combative stance when desiring to win without fighting may posture toward a truce, but it may also become counter productive and create additional criminal and civil legal issues following any physical battle. Instead, the best self-defense is the ability to apply de-escalating verbal and meta-communication while maneuvering to a safer location thereby achieving the goal of conflict resolution.

De-escalation for men will also be different than for women. Women are better off holding a neutral stance. A woman may likely remove many of her options if she takes a combative or male-like stance if confronted with a male threat. Conversely, if a man assumed a neutral position, the assailant is likely to perceive his body language as a sign of weakness thereby the stance becomes counterproductive for men and may only encourage the assailant to aggress further. Instead men taking a freeze walk position with hands open can meet the needs for male posturing while also perceived as less threatening or challenging to the assailant offering the men a better self-defense position physically and legally.

Model Mugging student fights off an attempted pin by the padded assailant.

Overall thousands of graduates (men and women) have de-escalated potentially dangerous situations and thereby achieving safety through conflict resolution and not physical violence. These graduates have given performance testament to Sun Tzu’s ancient teaching that the best self-defense is winning without having to fight.

One of our male students who is almost 60 years old, is also a cancer survivor so his bones are brittle from the radiation treatments, was out walking at 5 am. He became aware of a young, muscular, large, athletic male rode by him on a bicycle. But instead of focusing on his biking, the guy stared at our student with the look of a predator evaluating his prey.

The bike rider continued riding and then turned left on another street. Our student breathed a sigh of relief. He couldn’t jog since he had heavy hiking boots on but he sped his pace up into a forced march pace. As a result, he passed the next street but saw that the bike rider had gotten off of his bike and was now walking up that street heading towards him. Obviously, the predator had made three more left turns to go around the block then stashed his bike to make an interception on foot. Because our student had sped up, he was now 20 yards ahead of the intersection. The young, muscular, large, athletic male, called out, “Hey man! I want to talk to you.”

Our student pulled out his cell phone, punched in 911 and got a busy signal. In his city, it is estimated that over 250,000 emergency 911 calls go unanswered every year. But even though he had a busy signal, he called out, “I am at the corner of X&Y and I am about to get mugged. Hurry!”

The predator kept walking towards him. Our student stood his ground and shouted, “Stop!  Back off!  Leave me alone!”

The predator started mouthing off. But our student then went into our synthesized conflict resolution pattern. He accepted that it is OK for people who normally value the truth, to lie to a mugger or robber. Our student appreciated the aggressor outwardly and said, “You look like you are an athlete in good shape.” He also appreciated his Model Mugging experience that gave him the skills he was using.

Our student looked to turn the problem into a solution and calmly said, “We don’t need to get into a fight.” and added, “The police are on their way.”

The predator still stood there, still trying to figure all of this out. Our student backed away still facing his predator and continued to pretend to talk to the police on his cell phone. The predator postured by mouthing off, “I just wanted to talk.” then turned and walked back towards his bike. Our student was then able to reach a hotel lobby and call a taxi to take him home. Our student safely won without fighting.

Personalized training may be offered in small group settings and tailored for each person’s capabilities.

You can further assess and identify what may be the best self-defense for women with regard to choosing a self defense course for women that can add and prepare more personal options if you were ever confronted with a potentially violent situation. These additional options could provide you the skills and confidence to find safety without having to fight. Model Mugging courses providing the best self-defense training for women are scheduled on a regular basis.