Getting Tough About Rape

You are in bed at night and awaken to see a figure by your dresser. You are walking down a dark street and are grabbed from the rear, a knife pressed to your throat. You are at home and hear someone breaking into your back door; you run to the phone and don’t hear a dial tone. You are being raped by six youths.

But Thomas’s students are not only asked to imagine that they are being assaulted, they are asked to experience it. Thomas, who has black-belt degrees in karate and judo, personally attacks each student in a series of model muggings designed to let the women try out their techniques and come to grips with their fears. 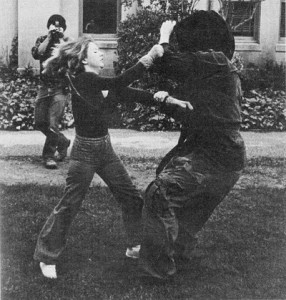 Women who take this course in self-defense don’t pass until they kick their teacher in the head.

Someone has experienced each of these situations. Now students in a unique women’s self-defense course at Stanford University are being asked to envision themselves in these instances and decide what they would do. It’s all part of an effort by instructor Matthew Thomas to help his students face the reality of assault and think out the possibilities while their lives are not at stake.

The idea is to put as much emphasis on the psychological aspects of self-defense as on the physical. To accomplish this, Thomas combines the simulated attacks and mental exercises with discussions, reading assignments and physical training. The result is a course that’s teaching women not only to knock out attackers but to take more control in other areas of their lives, as well.

Thomas first began to realize that physical training alone was insufficient when one of his female karate students with a black-belt degree was attacked and raped by an unarmed man in Los Angeles seven years ago. The woman believed she had disgraced the martial arts, but Thomas felt the martial arts had failed her.

To find out how, Thomas turned to police files and rape studies, investigating 2,700 assaults on women. The martial arts, he concluded, don’t prepare a woman for a real-life attack. Prompted by the rape and beating of his own lover at Stanford several years ago, Thomas used the data he had collected to design his course. Since then he has taught more than a thousand women at Harvard, Radcliffe, Wellesley and Stanford.

An international investment banker by day, at night the 27-year-old Thomas becomes an “assailant” for the class. He pads himself thoroughly for the attacks with pillows, knee guards and a bulky, custom-made helmet that surrounds his head like a giant black pumpkin. The outfit turns him from a lean, amiable businessperson into a dark and sinister-looking figure of grotesque proportions.

The lights go out, and Thomas and a student meet on the mat. The woman is slender and is wearing a plaid shirt, jeans and heavy shoes. Thomas veers toward her. She tries to fend off his hands and pass by, but his arms encircle her and in an instant the couple are on the floor struggling. There is no sound but the heavy thud of blows. It is over in less than 30 seconds, and they are both up discussing it. 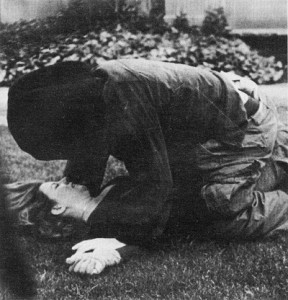 The women are told to aim for the vital areas — particularly the knees, the temples and the groin — and to strike as hard as they can. It is up to Thomas, with the help of his padding and his martial arts training, to protect himself from being hurt. When an “effective” blow is landed, he reacts accordingly so that the students learn what works.

Thomas enacts his muggings keeping in mind the loopholes he feels are left by the martial arts. While 90 percent of karate is taught standing up, for instance, 40 percent of the time a woman is knocked to the ground before she even realizes she is being attacked. Karate students are also trained to avoid impact with their punches and to steer clear of vital areas during practice in classes.

Essentially, the martial arts do not give a woman experience fighting in the type of situations she’s apt to encounter in an attack—in dim light, in street clothes and shoes and without a warm-up. Thomas tries to introduce these variations and a wide variety of other situations — even on occasion asking the women to have a few drinks first.

The physical training part of the course includes techniques from a number of martial arts styles — Aikido, Judo, Karate, Jujitsu, Tai Chi, Ninjutsu and Kung Fu. Some pointers on mobility are even taken from Western boxing.

The model muggings are introduced halfway into the 10 week course, after the students have had a chance to learn some of these techniques and develop their strength. Even so, many of the women don’t do well in their first “assault.” Faced with an attack, they forget what they have learned and hit Thomas in the arm or the side or miss him altogether.

Once Thomas used the muggings only as a final exam, but too many students failed. Now each of the 20 or so women in the course is mugged some 50 times. “As I see it,” Thomas says, “you make your mistakes in class; you don’t make them on the street.”

The simulated attacks teach the women not only what they can do, but what they aren’t able to do. They learn their limitations; yet, at the same time, they lose their fear of combat. While men often are accustomed to physical struggle because of their involvement in contact sports since boyhood, women generally are not, says Thomas. Attacked, women are likely to feel bewildered and defeated.

“Women,” he says, “must be reconditioned to struggle, fight and continue fighting until they win.”

To help his students gain confidence and become so used to winning that they won’t accept defeat, Thomas begins the model muggings slowly, gradually making them more difficult. By the end of the quarter, he estimates, 90 percent of his students have the capability of knocking out an attacker in the first five seconds of an assault.

The women are taught to continue the fight until they have kicked Thomas in the head. A reluctance to kick someone when he’s down is one of the hardest psychological barriers for women to overcome, says Thomas. But he feels it’s important for a woman to knock out an attacker rather than just hurt him and flee. “You can hit a person and run, and they can get up and chase you and you’re in a worse situation,” he says. “How many men can run faster than a woman? Hit and run is foolish.” 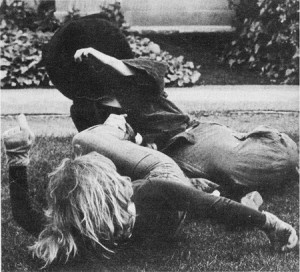 While this may seem a rather militant approach to self-defense, it is balanced by the fact that Thomas spends a lot of time teaching his students how to avoid conflict entirely. The model muggings involve not only physical attacks, but verbal approaches that give the students opportunities to stop an assault before it starts.

Most rapes do not begin with surprise attacks but with periods of conversations where the man tests his victim. The proper response can make fighting unnecessary.

It is surprisingly difficult, however, to think of a verbal deterrent under pressure – even in class, say Thomas’ students. By practicing over and over again, their reactions become automatic. Responses range from the humorous (“I gave at the office.”) to the disgusting, (snorting and nose picking), from the clever (“Will you help me find my German Shepherd?”) to the bizarre (breathing in the attacker’s face).

One problem many women have in an initial encounter, says Thomas, is that they have been taught to be polite. When a vehement “Get Lost!” might work, they’ll tend to be pleasant, hoping their suspicions are wrong. Yet most rape victims report they might have avoided attack if they had heeded a gut-level warning that something was amiss.

In discussions occupying approximately half the class time, the students talk about the reasons for rape: society’s attitudes towards women; rape fantasies; ways of using an assailant’s sexism against him and myriad other social, spiritual, physical and psychological topics.

Reading assignments range from feminist literature, such as Susan Brownmiller’s Against Our Will, to a guerrilla warfare manual by Mao Tse Tung. There are 10 books in all and excerpts from several other works, including On Death and Dying by Elisabeth Kubler-Ross and The Buddhist Tradition by William De Bary. The course receives full academic credit at Stanford.

The discussions and readings are designed, in part, to deal with mental blocks against self-defense and the psychological changes that come with learning to disable an assailant. “To take a woman who has never hit anyone in her life and teach her how to knock someone out in a few seconds, requires some radical adjustments,” says Thomas. 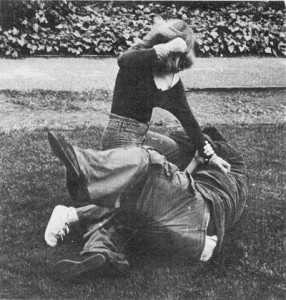 In making these adjustments and learning to overcome their blocks against self-defense, many of Thomas’ students are find they’re also gaining confidence in other areas of their lives.

Cindy Miller, 19, says, “It’s made me a lot more aware that you can still be a woman and have power. I feel much more like I can speak up in situations and be more assertive.”

April Nielson, 23, who helped teach the course after taking it herself, notes, “I refuse to be in a lot of situations that I used to accept before. Now I feel I have more choices, because I know I don’t have to be quiet. I don’t have to take it.”

The students’ confidence in their new abilities is apparently not just wishful thinking, either. Of the more than a thousand women taught by Thomas since he began his course six years ago, there are quite a number with success stories and none who have reported failures.

One woman was walking home from a party at Harvard when she was grabbed from the rear and slammed against a wall. She struck the man’s throat with her hand, knocking him unconscious long enough for the police to come.

Another graduate of the course was attacked in an icy parking lot at Harvard and knocked to the ground. She kicked her assailant in the groin and he was still disabled when the police arrived 10 minutes later. 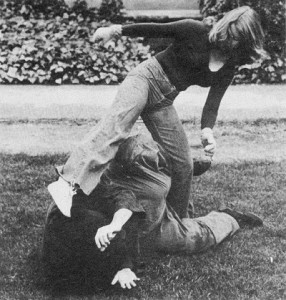 Four women graduates of Thomas’ class have used psychological ploys to avoid rape. One was followed home, but instead of going to her own door, where assaults often occur, she broke the window of her most belligerent neighbor just as her assailant started to rush her. When the neighbor emerged yelling, the assailant fled.

Still other graduates used their wits to keep them out of potentially dangerous situations. One was dining in a pizza parlor when a suspicious-looking man entered. Remembering Thomas’ warning that women should heed their instincts, she abandoned her pizza and left. Her intuition proved right: the man produced a sawed off shotgun and shot up the restaurant, injuring two persons.

Such stories must provide a lot of encouragement to Thomas’ students, but they say the confidence instilled by the course grows slowly.

According to Ellen Brigham, there is a stage of intense paranoia after the first few model muggings, when the reality of rape has struck home, but so has a student’s awareness of her helplessness.

By the end of the course, however, Thomas’ students are able to confront the possibilities of assault and realize it could happen to them.

As April Neilson says, “There’s still the same reality of being raped. It is a reality. I don’t want it to be my reality, so I’ll take responsibility and do something about it.”