Matt Thomas founded the concept of teaching women to defend themselves with full contact fighting against a male instructor wearing protective padding. In the summer of 1971, Matt was a student studying Karate in Southern California martial art dojo. One of his classmates was a female student and second degree black belt who had won martial art tournaments for sparing and Kata. Kata is a specific set of continuous beautiful martial art movements that help develop balance and coordination. 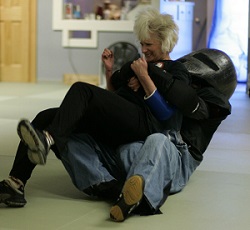 Model Mugging student is taken to the ground by the padded assailant in a rear attack self defense scenario.

One night the female black belt student entered the dojo in the middle of the black-belt circle. She was visibly upset. She said she had been raped and that despite her fighting skills, she had been unable to defend herself against the rapist. She was walking to her car one evening when she was attacked. He grabbed her, threw her on the ground and straddled her. She was ineffective when she punched the assailant in his stomach and even thought that she held her punch, just like she had been trained in point tournament fighting, or sport fighting. He severely beat her, and then raped her. She felt as though she had disgraced the school and her fighting art.

This stunned Matt and all of the other students because here was a black belt whom they had all seen perform beautifully in the dojo, yet who was totally powerless at the moment when she needed her skills and power. Everyone was silent, waiting to see what the master instructor would say, and how he would explain why one of his best students was so unprepared for a real-life battle. But the master did not explain, instead, he agreed with her. Her instructor had the old traditional martial mindset that his school and fighting art was the best. In her mind she had failed believing “failure” she had shamed everyone, disgraced his school, and their fighting style.

Her instructor said she needed to train harder. She ran away crying and Matt went after her to try to offer some kind of support, but as he turned around the karate master’s (sensei) eyes told him that if he left, he should not return; later validated by explicit instructions from his sensei not to return for being disrespectful.

Matt, who had watched this woman train with such grace and skill, suddenly questioned the effectiveness of the martial arts when used against a real-life attacker. Matt felt the martial arts and the school had failed this black belt student by letting her believe she could adequately defend herself when, in fact, she could not. She was taught an art, but she was not taught how to defend herself against the kinds of attacks women are subjected to.

Model Mugging®is martial science and not a martial art. Martial Science began when Matt did not return to the dojo and while finishing his last year at Stanford University he researched over 2700 (later over 3000) assaults against women and spoke with numerous survivors. He discovered commonalities in the ways rapists attack women. He discovered that males attack females differently than they attack other males. Men will fight other men, but a male attacking a woman will normally throw her to the ground with the intent to degrade her through sexual acts. A man learns to fight from the standing position, and is unaccustomed to fighting on the ground unless he has experience and training in ground fighting. When a rapist forces a woman onto the ground, he is not planning to fight her. His intentions are that of conquest and humiliation. 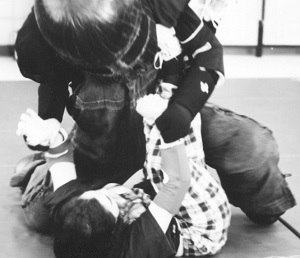 Padded Assailant trying to control self defense student at the beginning of the fight.

Ironically, a woman is actually stronger when fighting from the ground, because she is able to use the strongest parts of her body, her legs and hips. A woman who fights a man from the standing position cannot realistically compete with his greater upper body strength. An average woman’s upper body strength is 30% of an average man’s. Men are commonly taught to fight from a standing position, even though many fights will end up on the ground, they are not going to be comfortable on the ground unless they are a wrestler or grappler. If a woman is trained to fight on the ground, she can gain a significant advantage if attacked.

While finishing his education at Stanford, Matt Thomas double majored in biology and psychology and earned Bachelor’s and Master’s degrees in 4 years. He studied the most efficient ways to teach and synergized many of principles of his instructors. He applied Albert Bandura’s Role Model Mastery of how to overcome fear of snakes and flying to overcome the fear of combat; Dan Millman’s Peaceful Warrior humane coaching style of teaching with inspiration, joy and laughter.

He used Colin Pittenridge’s Effective Animal Communication with Karl Pribram’s Neurophysiology of Learning and Ernst Hilgard’s State Conditioned learning with the application of adrenaline stress training. Then he incorporated Phillip Zimbardo’s Cognitive Dissonance on how to be a peaceful human or a fierce warrior when appropriate as when defending against attack. Klaus Bensch’s rigorous applications of the Scientific Method for real world applications. He structured the course after Joseph Campbell’s The Hero’s Journey.Later when attending Harvard Medical School, the process of David Shapiro’s Biofeedback in learning was implemented into the training.

Finishing his research Matt transferred Harvard University medical school in 1972. He offered a self defense class after a violent assault occurred on campus. He obtained permission to use the gym and offered the course to the student body. He immediately implemented the information he learned from studying assaults against women and applied modern instructional strategies in the format of the course where he combined Eastern and Western methodologies. Matt has described the course as being martial science. 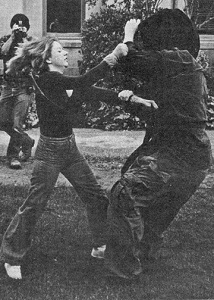 In his first course Matt taught the techniques based on how women are actually attacked as well as developing empowerment through a role model mastery program. He taught women the counter techniques to the positions that rapists commonly place women in and the strategies necessary to stop an assailant. At the end of the course he covered himself in primitive protective padding and tested each woman by attacking them in order to test their ability to defend themselves. They all failed!

The reasons these women failed were that they felt inhibited about hurting him. They felt uncomfortable about hitting because they were brought up with the mindset that “girls” are nice and did not hit or hurt people. Even though they were taught the proper techniques, most of them just froze in fear and were unable to overcome the “freeze response.” He extended the class and re-attacked the women and they overcame their inhibitions and began responding effectively.

During the first fight at graduation, Matt was knocked unconscious. This demonstrated two points, first, the fighting techniques worked, and secondly he needed better protective body armor. Through the years of teaching this revolutionary program he was injured over forty times and knocked out twenty-two times. In the early 1980’s the program gained momentum and popularity.

Matt led the way in developing a protective suit that is now referred to as the “padded assailant.” The modern equipment allows the male instructors to get up and walk away after each fight, uninjured. Injury is extremely rare considering the full contact devastating strikes instructors receive while teaching their students how to really fight. Not only is the equipment the best, the training Model Mugging instructors receive in how to properly wear it reduces the chances of injury. 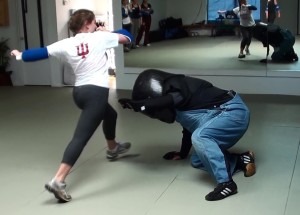 in the early 1980’s, the synergy of efforts from other dedicated instructors improved instrumental in building the program. Matt’s martial arts students David Brown and Jeff Adams were instrumental in developing the next generations of protective body armor. Jeff Adams and Kathy Adams introduced Matt to Sheryl Doran who really gifted at marketing our classes to the public and they began to build significant public awareness for the program. Danielle Evans (now Danielle Smith) and Julio Toribio came on board and developed the instructor training program in the mid 1980’s.

Since the 1980?s Model Mugging concepts have been copied by many martial arts groups, other women’s self defense programs, and law enforcement worldwide. “Imitation is the sincerest form of flattery,” famous quote by Charles Colton. Many instructors have indirectly complimented Matt Thomas through adopting his discoveries in the enhancement of martial science to improve human performance under the stress of danger and harm. Since the late 1980’s numerous other groups began copying the mock attacker and full force/full contact training.

Thomas’ revolutionized self defense training has been documented in many articles beginning in 1978 with Human Behavior Magazine and an article, “Getting Tough About Rape.” Some of the many other self defense articles about Model Mugging in most major magazines substantiates the Model Mugging claim that copycat or break away groups fail to give credit to the sacrifices and creativity of Model Mugging founder, Matt Thomas. 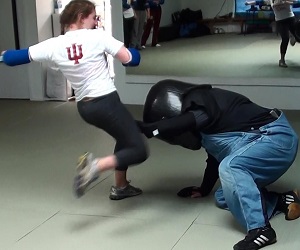 Since 1971 rape prevention classes and crime prevention have evolved, but the origins and credit go to Matt Thomas’ innovative work in martial science!

Model Mugging Self-defense is currently based in Los Angeles County in Southern California.

Other links describing considerations when choosing a self defense course for women: